A brief history of the Apron and the variations of the “Brightware” that adorn them. By Mike Lawrence

The earliest representation of a Masonic apron we can definitely claim as in the speculative sense, can be found on a portrait of Anthony Sayer, the first Grand Master in 1717.

However, with regard to the white leather used, a very practical point soon made itself felt, which led to the refinement and adornment of the simple leather apron. Undyed white leather was very apt to leave white marks on the clothing of the brethren and this led to the provision of a lining. 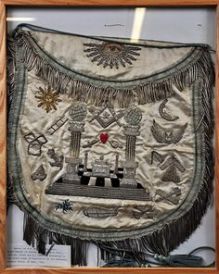 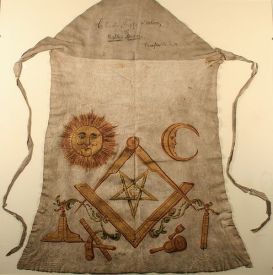 In the Minutes of 17 March 1731, Grand Lodge we read the following:

This is the earliest mention of the colour blue in connection with Masonic clothing, but we do not get any indication of the shade of blue until 1734, when on the authority of the Deputy Grand Master an order was given for Masonic clothing. This was described as:

“Two Grand Master’s aprons lined with Garter blue silk and turned over two inches, with white strings; two deputy Grand Master aprons turned over one inch and a half, ditto,”

Here we arrive at a definite shade of blue, the Garter blue, and there is no possibility of doubt about the appearance on the fronts of the aprons, which from the modest turnover binding of the edges, has developed into the borders on the aprons which we now have.

It must be noted that the Garter blue used was not the colour which we recognise by that name today. In Stuart times, the Garter ribbons were light sky-blue, similar to that on Craft aprons today. This was the original Grand Officers colour. It was not until about 1745 that George II altered the shade of Garter blue to the darker colour, we are now accustomed. This was in order to distinguish his Garter Knights from those supporters of James II and his heirs who had been created Knights of the Garter by the exiled family and were not recognised by the Hanoverians.

When this alteration to the darker shade of blue of the Garter took place, the aprons of the Grand Officers followed suit and so still remain today as Garter blue. The light blue was left available for the Craft in general and in time was adopted at the Union in 1813.

Why was blue chosen? Possible because of three verses in Numbers 15:

38 “Speak unto the children of Israel, and bid them that they make them fringes in the borders of their garments throughout their generations, and that they put upon the fringe of the borders a ribband of blue:”

39 “And it shall be unto you for a fringe, that ye may look upon it, and remember all the commandments of the Lord, and do them; and that ye seek not after your own heart and your own eyes…”

40 “That ye may remember, and do all my commandments, and be holy unto your God.”

The first mention of gold fringes was in 1787 and is found on the bill received for the apron of the Prince of Wales and the Duke of York. Both aprons cost £1-1s-0d, £1.05p in today’s money.

Prior to any kind of uniformity, aprons came to be of all sorts of sizes, colours and materials. Those of the ‘Antients’ were larger and longer than those of the ‘Moderns’ and Brethren began to adorn them with beautiful Masonic designs, either embroidered, embossed or painted, the more elaborate the better. This practice finally reached a situation where aprons became too costly for ordinary men in ordinary Lodges.

The strings of the aprons which had received the embellishment of decorated ends, were passed around the waist and tied under the fall of the flap so the tasselled ends would hang down on the front of the apron. 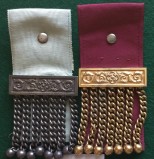 The use of Brightware on our aprons, Brightware being the stainless steel used for decorative attachments that adorn out aprons also became popular and was standardised by the Union of the two Grand Lodges in 1813 and in general there were three designs for the tassels holders and the levels: Plain, Plain with bevelled edge, and foliated. 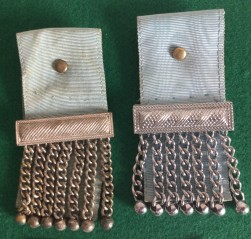 As explained the seven metal tassels on our Craft aprons today were adopted as a permanent decoration in 1813 and we are told remind us that no Lodge is perfect unless seven Brethren are present: The Master, his two Wardens, two Fellowcrafts and two Entered apprentices. We also learn that in older times, the seven ages of man were thought to be influenced by the seven then known planets and no Master Mason was considered efficient unless he had some knowledge of the seven liberal arts and sciences. These tassels ultimately became attached to two vertical ribbons representing the two pillars at the porch way or entrance to King Solomon’s Temple.

In addition to this, rosettes and levels or taus, which indicate the rank of the wearer, were added as a regulation pattern again in 1813, along with the size which is generally 14-16 inches wide and 12-14 inches deep. The Rosettes and the levels or taus are set in the form of a triangle with the apex upwards, symbolic of the Divine Life attainable by complete knowledge after the resurrection. The levels have also been said to represent the first, second and third step in regular Freemasonry.

In older times, the apron was made from lamb skin and before it can be made, the life of an animal must be taken. That animal, the lamb, has ever been regarded as the symbol of innocence and therefore the apron is regarded as a symbol of peace and innocence.