“Are you one of us?” By Mike Lawrence Part two of a two part article.

Letting somebody else know that you are a Freemason can be a tricky business. It can be even more difficult seeking fellow brethren when we find ourselves in new environments.

But it is those occasional or casual remarks that we make, often in unfamiliar surroundings, that sometimes bring about the most amazing replies. Here are a few anecdotes from Brethren who wrote to me after reading “Are you one of us?” Part One.

While recovering in hospital, Bro. Morris Saxby-Taylor was quickly up and about helping with little jobs around the ward. The duty male nurse asked him to lay the tables for lunch, Morris agreed adding the retort, “I’m happy to be your Steward.” He gave it no more thought until a short while after the male nurse whispered to Morris, “Thanks for helping with the working tools.”

Bro. Morris also recalls the time he was at a Police conference discussing the case of a Dentist who practised anaesthetics on his wife. Unfortunately, she died through one of his experiments. To his amazement one of his colleagues threw in the comment, “That’s the hidden mysteries of nature and science.”

This is similar to an incident that happened to another brother, whose name was not supplied. Several years ago when attending a business seminar, the main speaker was emphasising the difficulties he had experienced while approaching a certain problem. “You see,” he explained, “I was taught to be cautious!” A small ripple went through the audience. Afterwards, he was amazed at how many brethren had noted the remark. They all met together during lunch and what could have been a boring day turned into a really enjoyable event.

Several years back on television, that well known comedian and Freemason who regularly graced our screens with his Saturday night game show made a very interesting remark. While interviewing a contestant who was wearing check trousers he remarked, “My club has a carpet that colour!”

Bro. Ron Prothero tells me he has often used the phrase, “How old is your Mother?” Referring to the number of one’s Mother Lodge.

When holidaying in Spain, Bro. Nicholas Hopes was standing at the hotel bar when he noticed three gentlemen who took a drink simultaneously using their right arm. Nothing strange about that you might think. However, upon closer examination, Bro. Hopes discovered that they were all Masons and up until that point they had all been strangers.

One of the most amusing replies I received was from Bro. Michael Clough. He was initiated into a Lodge where his father and uncle were members. His other brother became very curious as to how Masons distinguished themselves to each other.

Quite by chance, all four of them were sitting together one day when the three Masons crossed their legs, right over left, at the same time. His brother was convinced that he had discovered the secret. Some years later when he was initiated, he was most disappointed to discover that “knee-crossing” was not part of the ceremony. 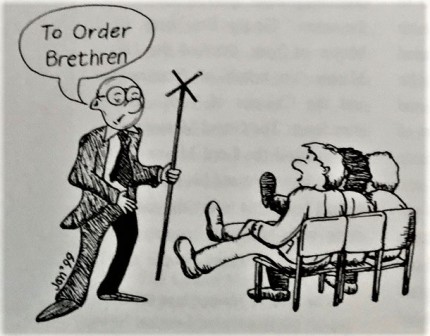 The final offering comes from Bro. Neil Watkins who recalls the story of a work colleague who was diving in the Gulf. He had already completed four, three-month tours, all with the same diving supervisor. The supervisor noticed that on one particular day during each month and at a specific time, 21.00 Hrs British time, the diver would walk to the fo’c’sle raise his non-alcoholic drink, and toast someone’s health.

The supervisor had suspected his colleague was a Mason but had never had an opportunity to discuss personal issues with him. However, one day the diver was on a platform 130ft underwater and the conversation went something like this.

“Number One Diver.” Called the Supervisor from his control position on board. “Are you ready?”

“Now step off with your left!” Called the supervisor. Needless to say their working relationship became richer with their mutual love of the craft.

Of course, more often than not, a simple handshake can suffice guaranteeing that any business at hand, be it work, rest or play, can progress in an honourable and enjoyable manner. This of course, is the jealously guarded and unshakeable bond that Freemasons throughout the world enjoy.